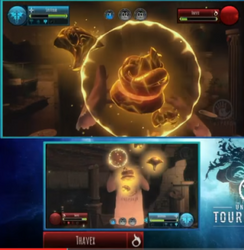 Three-headed serpent (or is that three serpents?)

Serpant
Add a photo to this gallery

Assemble this three headed snake statue with a base piece, body piece, Left, Right, and Middle snake heads to summon 3 large fire-breathing Serpents that climb up the Pillars from the fiery pit revealed in round 2 and 3. The snake heads take turns shooting a very large fireball, which does heavy damage.

Throwing a dispelling censer when the snakes are new and healthy can kill two of the three heads instantly, making the final head more reasonable to defeat.  This arena doesn't provide much for cover to hide behind, so be prepared to teleport away after a fireball is thrown.  The guardian also tends to block access to your opponent's embers, making it more difficult to shoot those down too.

Retrieved from "https://the-unspoken.fandom.com/wiki/Serpents?oldid=882"
Community content is available under CC-BY-SA unless otherwise noted.