The Unspoken digital character models are based on tall men. Because the hit box for what counts as damage is based on the digital model, this can leave short players at a significant disadvantage. It won't be obvious when you first start playing (you have more important skills to learn first) but it becomes very apparent in duels with other players. For tall men, this difference in alignment isn't likely to be significant - a few inches, perhaps. For the average height American woman (5' 4") this is 14" of misalignment. That makes it difficult to center-block primal shots aimed over their heads, even though such aims remain in the hit box and cause damage. The AI doesn't do that very often, but human players certainly do. 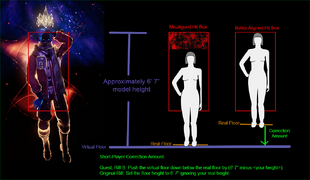 To see the problem, go to the in-game mirror Upstairs. Put your hand on your head. Is it on top of the model's head, or buried inside it? Put your pointer finger horizontally on your chin. Is the model's finger on its chin? Put your pointer finger horizontally at your eyes; does it match up with the model's eyes? If you are well aligned with the model, the hit box will only extend a couple inches above your head; easily reachable for shielding. If your floor height is set too short, you end up significantly shorter than the digital model, and will pay for it with a zone of hit box you can't defend.

The solution for this is simple for the original Rift. In your Oculus software, there is a device setting for Floor Height. Set it to 6' 7" or 198 centimeters. Then go into game, go Upstairs, and look at your digital character in the mirror again and recheck the alignment. It's harder with the Quest or Rift S - you'll need to push the virtual floor down below the real world floor. It seems the Rift S may not let you do that.

Does this adjustment also impact the hit box near the knees? Mathematically, yes it probably does. But players don't aim there as often, and in practice I haven't seen a downside to this adjustment so far. I have seen improvements with my ability to shield not just above my head but also to my sides, as it aligns better with my arms as well.

If you're an experienced player and want to know what it's like to play the game with the height handicap, set your floor height to 5' 0" or 152 cm and play some games against other experienced players with good primals game, and tell them to aim a lot at your head.